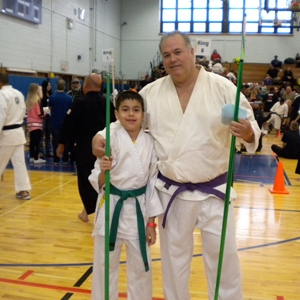 Three times a charm for me, as Dr. MacGillivray continues to get me back in the game of competitive sports. I'm a 46 year old Former U.S. Marine, who has been on the 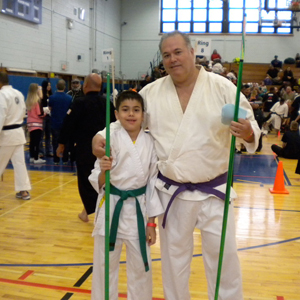 journey of earning a Black Belt. In 2010, Dr. MacGillivray operated on my right knee as I had a torn meniscus. Four weeks later, I was back in Karate as nothing ever happened and weightlifting as well. In 2014, the left knee needed meniscus repair and a chondroplasty. Again, four weeks after the surgery, I was kicking that bag and riding my bike. Never had any problems with pain or flexibility in my knees thereafter.

Unfortunately this year in March of 2015, practicing hip throws in the Dojo, my triceps was completely torn off the bone at the elbow when I landed on the mat. When I went to see Dr. MacGillivray, he told me this is a rare injury, as the MRI showed a complete 100% rupture and separation of the triceps. To me, this was devastating injury, as I needed full extension of my arm to perform blocks, punches and throws. On March 24th, Dr. MacGillivray re-attached my triceps to my elbow. I remember being in the recovery room and him coming over to me, putting his hand on my chest and telling me 'Roland, you are going to be fine.'

Lying there, I knew it was my turn to heal and get stronger as I am a hard worker. I followed his post surgery instructions to the letter. Wore the arm cast for 5 weeks, did therapy to regain my strength and range of motion. On June 28th (3 Months post surgery), I entered a Karate Tournament with my son earning First Place in Weapons and Kata. Six months later, I am back to weightlifting, Martial Arts and sports as if nothing ever happened to my arm. As I am sure I will sustain more injuries down the road, I also have peace of mind Dr. MacGillivray will treat them successfully.